How to calculate downlight spacing

HOW TO CALCULATE DOWNLIGHT SPACING

Are you wondering how to calculate downlight spacing in order to illuminate the rooms properly? Consult this guide!

Installing downlights is a system that has become very popular in the last few years.

Lighting design items like these are always very fashionable. Moreover, downlights allow to illuminate any kind of room in an elegant and functional way.

In order to get the perfect result and have proper lighting in every room of your house, you should calculate three important factors:

– the number of downlights

– the right distance between the light fixtures

– the distance between the downlights and the wall.

But no worries, it’ll be a piece of cake!

Before starting to calculate the number of downlights and the distance between them, you should keep in mind the parameters that determine whether your room is illuminated properly or not.

Although we’re used to think about lighting in terms of watts, there are two other units associated with light:

– the lumen, which is the measure of the quantity of light coming from the source (that is the light fixture)

– the lux, which is a unit relative to the area illuminated by the source.

Let’s start by examining how to operate in the various rooms of the house. You aren’t going to need the same amount of light in every room, but rather you are going to calculate the number of downlights and the distance between them depending on the needs and size of the rooms.

But that is not all. You also need to take into consideration the lumens produced by the light fixtures and the lux you wish to obtain.

In the living rooms and the bedrooms you are going to need a luminous intensity that ranges between 25 and 50 lux, up to 100 to 150 lux if you want a stronger light. 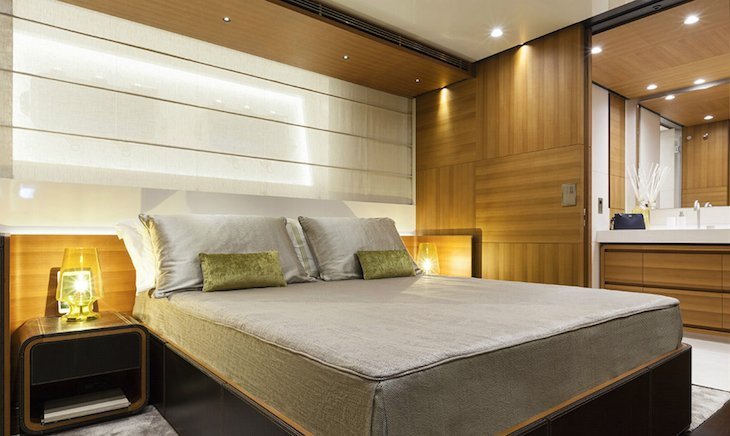 Correct distance of LED spotlights in a bedroom (example).

Considering that each LED downlight produces 100 to 400 lumens depending on its technical specifications, you can easily do the math.

How do I calculate how many downlights I should install?

By dividing the luminous intensity recommended for each room by the light produced by a single downlight (everything expressed in lux), you will obtain the number of elements necessary for illuminating your room properly.

Once you have established the number of downlights, the next thing you need to do is determine the right distance between the light fixtures, and between them and the wall.

HOW TO CALCULATE DOWNLIGHT SPACING

Once you have established the number of downlights necessary for lighting the room properly, the first thing to do is draw a lighting system diagram. This way you can decide the lighting design of your downlights.

Once the diagram is ready, let’s start with the temporary arrangement of the downlights. Remember that you should always start by placing the downlights that are closer to the walls, as they will work as a guide to position the other downlights at the right distance.

A good rule is to place the downlights that are closer to the walls at least 1 metre away in order to prevent the formation of light cones on the perimeter walls.

Once you have arranged temporarily the four corner downlights, you can carry on and determine the distance of the other light fixtures.

Let’s suppose that you want to install downlights that emit a light beam at a 30 degree angle: the right distance between the light fixtures in order to prevent the formation of dark areas is about 1 metre. 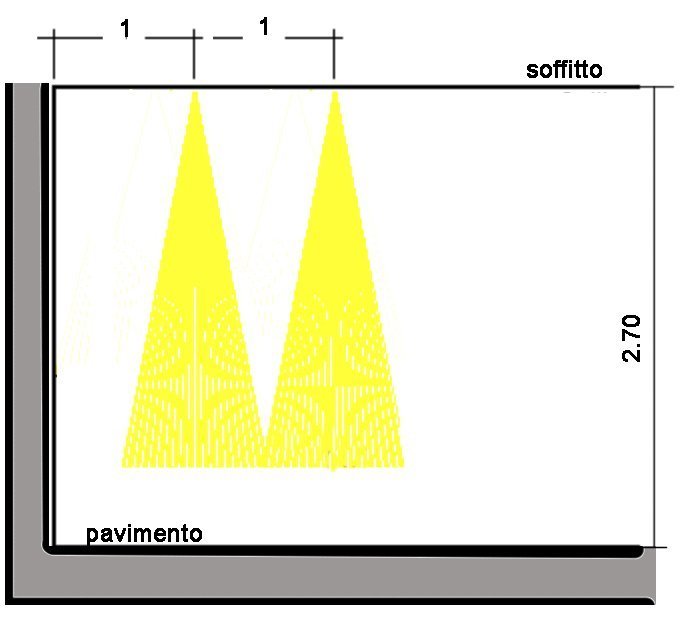 This distance can vary depending on the light beam emitted by the downlights and the effect you wish to get.

Once you have established the optimal distances between the downlights, let’s have a closer look at how to get proper lighting in the various rooms of the house

HOW TO CALCULATE DOWNLIGHT SPACING IN THE KITCHEN

The kitchen is a room that is very often not lit properly.

However, proper lighting is especially important in this portion of the house, above all over the worktop. 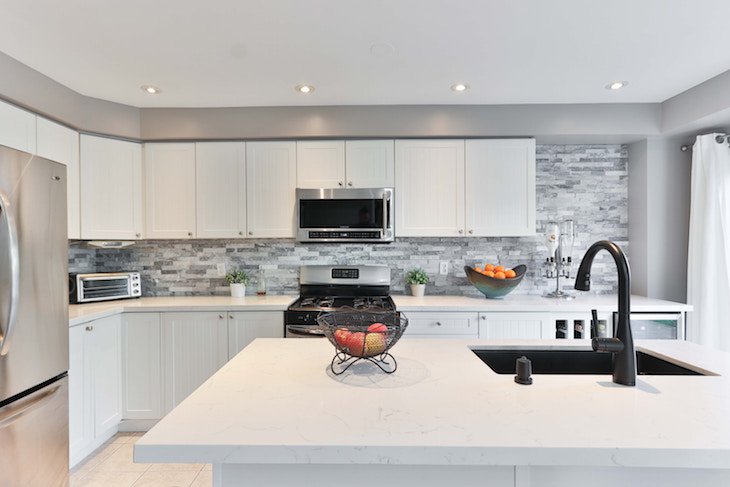 In particular, you will definitely need to plan a direct light that creates a sharp light beam on the worktop, whether you have suspended cabinets (in this case you can plan an LED strip underneath them) or a kitchen island (therefore the worktop will be entirely lit by the downlights in the ceiling).

In this case you can “play” with bigger-sized downlights in order to guarantee proper lighting for the worktop without altering the lighting design of the room.

Be careful not to leave the rest of the room behind, which, unlike the worktop, will be lit by a scattered, less direct light.

DOWNLIGHT SPACING IN THE LIVING ROOM

For the living room lighting, you can install a series of downlights in the ceiling and position them so that they create light effects on specific elements you wish to highlight.

For instance, if you wish to give prominence to specific architectural elements of a living room, a proper arrangement of the downlights will definitely create a scenographic effect.

As an alternative, you can use them to illuminate specific details of the underlying furniture.

DOWNLIGHT SPACING IN THE BASEMENT

What should I do when I need to calculate the distance between the downlights in a basement?

No worries, there aren’t major differences between the basement and the other rooms of the house. You should keep in mind that, since there is no natural light source, the ceiling lights will need to make the room bright and welcoming but without exaggerating. You should always avoid the glare effect, in a basement too.

The only thing that might be different from the other rooms is ceiling height, which is usually lower in the basement than in the above-ground rooms. Therefore you will need to be careful not to create, with the false ceiling, a room that is too stifling. But this can be avoided by using lights properly.

In this case, since ceiling height is lower, you need a greater distance between the light fixtures, and you must also check the right number of downlights to install and their power.

– How much a yacht cost?