If you are looking for ideas for dropped ceilings for the bedrooms, you have come to the right place.

Inserting a dropped ceiling into a house is never a simple procedure. Consider, however, that installing a dropped plasterboard ceiling will allow you to make the most of the rooms of your house. Keep on reading.

Technically speaking, a dropped ceiling (which can also be referred to as suspended or false ceiling) is a flat and light structure, anchored to the main ceiling with specific hooks. More precisely, a dropped ceiling consists of a supporting structure, in the strict sense of the word, and of covering panels.

The supporting structure consists of a roof frame (usually made of light metal) sustained by steel tie rods, which are anchored to the main ceiling.

Suspended ceiling panels can be made of different materials (from plasterboard to metal sheet), but plasterboard is generally used in private homes.

False ceilings have become very common over the last few years. By giving up part of the room’s net height, you will have a great solution for installing lighting systems, and also a practical hollow space, perfect for concealing the wiring and not only.

THE DIFFERENT TYPES OF DROPPED CEILING

There are two types of dropped ceiling, removable and non-removable.

A removable dropped ceiling is generally used if the gap needs to hold wiring (it’s rarely used in private homes). It’s made up of panels that can be opened for electrical system inspections.

A non-removable dropped ceiling, on the contrary, has more of an aesthetic purpose. It’s used to get a lower ceiling, which is more pleasing to the eye, and to install recessed lighting elements. In the latter case, the finishing and closing of the plasterboard panels are essential in order to have a quality final product.

THE USES OF DROPPED CEILINGS

In the past, suspended ceilings have always been widely used in both residential and commercial buildings, mainly because of the need to quickly heat houses in the winter.

Dropped ceilings are perfectly suitable for any room of the house, wherever they are needed for technical or aesthetic purposes. They are most frequently installed in the bedrooms and in the living area/kitchen.

Not only appearance and light. A suspended ceiling is also an efficient way to thermally insulate and soundproof rooms.

Thanks to the sound-absorbing and insulating covering materials, it’s also possible to install a false ceiling to improve interior acoustics and maintain ideal thermal comfort.

DROPPED CEILINGS FOR THE BEDROOM

By planning to install a suspended ceiling in the bedroom, you will be able to optimise the lighting project of the room and not only. Let’s see how.

Thanks to a false ceiling, it will be possible to plan a series of recessed lighting fixtures to install where a greater amount of light is needed. Apart from illuminating the room evenly, recessed lights in the false ceiling of the wardrobe area for example will allow you to use the room to its fullest.

Especially in modern design bedrooms, a suspended ceiling will create plays of light and shadow that highlight the purity of the interiors’ geometric shapes. 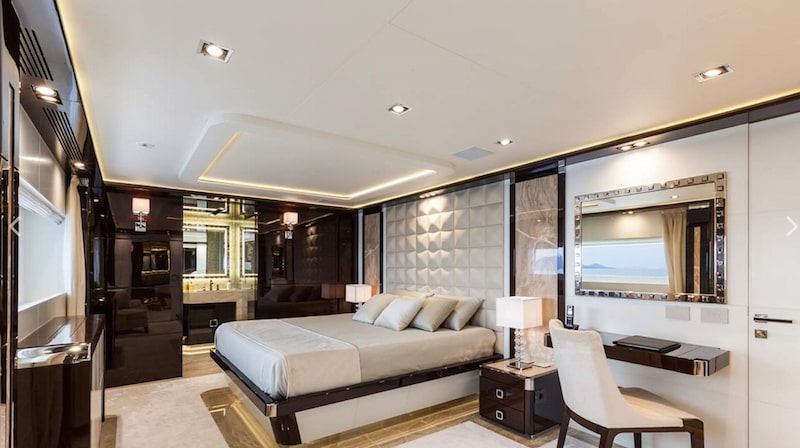 A dropped ceiling in the bedroom with recessed spotlights

Dropped ceilings for the bedrooms

A detail of great aesthetic and practical relevance is the so-called cove lighting.

What is cove lighting?

Cove lighting consists of an interstice that is usually created along the perimeter of the suspended ceiling (but it can also follow different patterns) for the installation of a continuous lighting system. 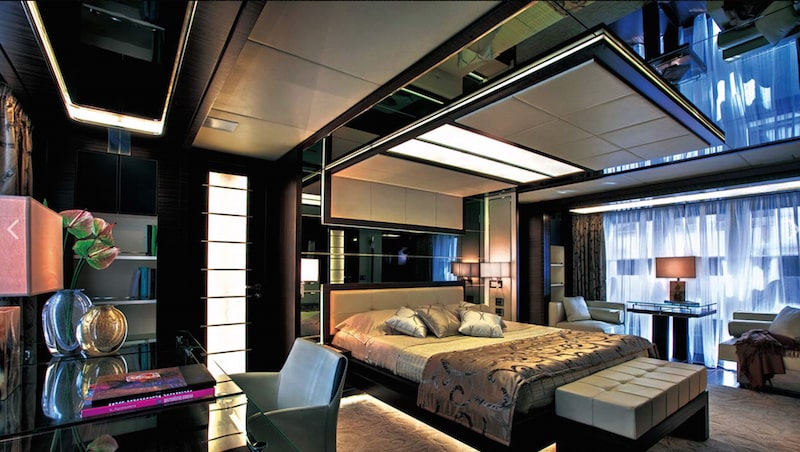 A dropped ceiling in the bedroom

The resulting effect is very fascinating, without losing sight of the elegance and precision of modern design, nor the lighting of the room.

MODERN BEDROOMS AND PLASTERBOARD: NOT ONLY DROPPED CEILINGS

In modern bedrooms, plasterboard is not only used for false ceilings, but also for other creations. Backlit recesses near the bed are definitely a glaring example.

These little recesses, apart from lending even more elegance to the room, are also highly practical, and act as bearing plane and as lighting element, by creating the perfect setup for the bedroom.

Dividing walls are another use of plasterboard in modern bedrooms that combines practicality with aesthetics. Dividing large bedrooms by using plasterboard walls (not necessarily to full height) helps optimising space and creating the wardrobe area, for instance.

It’s also possible to install a plasterboard wall lining behind the bed in order to create on the wall the same light effect of the cove lighting on the ceiling. An elegant detail, perfectly consistent with a modern and essential interior design.

NOT ONLY BEDROOMS. THE DROPPED CEILING IN THE KITCHEN

The living area too is suitable for installing a suspended plasterboard ceiling, especially the kitchen.

Reducing the net height of the room will allow you to properly illuminate the kitchen, and will also give you the opportunity to install the suction system inside the gap between the ceilings in order to absorb the vapours produced while cooking.

A perfect example are the modern fume hoods that, installed above island stoves, fully furnish the kitchen area.

A false ceiling allows you to install these elements that are both practical and pleasing to the eye.

Much the same applies to lighting. Just like in the bedroom, a proper light is fundamental in the kitchen too. A suspended ceiling will allow you to install directable recessed spotlights, a great solution for illuminating the kitchen area smoothly while having the possibility to direct the light beam where you need it the most. 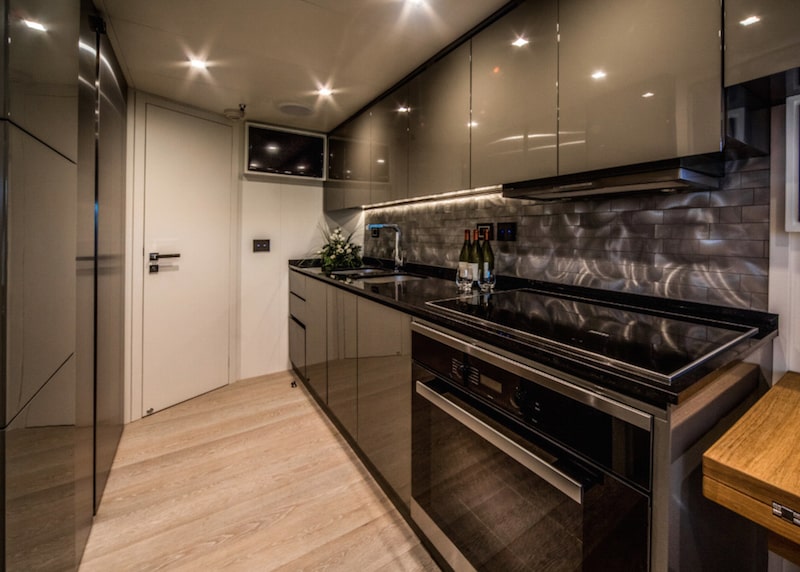 A dropped ceiling is an important detail and a must-have for your modern home. Useful for holding the wiring and for the installation of recessed lights, or also for creating a fascinating cove lighting, a suspended plasterboard ceiling allows architects and interior designers to create elegant light and shadow effects.

– How much a yacht cost?

– How to calculate downlight spacing