How much does a yacht cost?

HOW MUCH DOES A YACHT COST?

Do you dream of purchasing a luxury yacht and you are wondering how much it costs?
The 3 main factors that affect the amount are:
– design costs
– yacht interiors
– maintenance 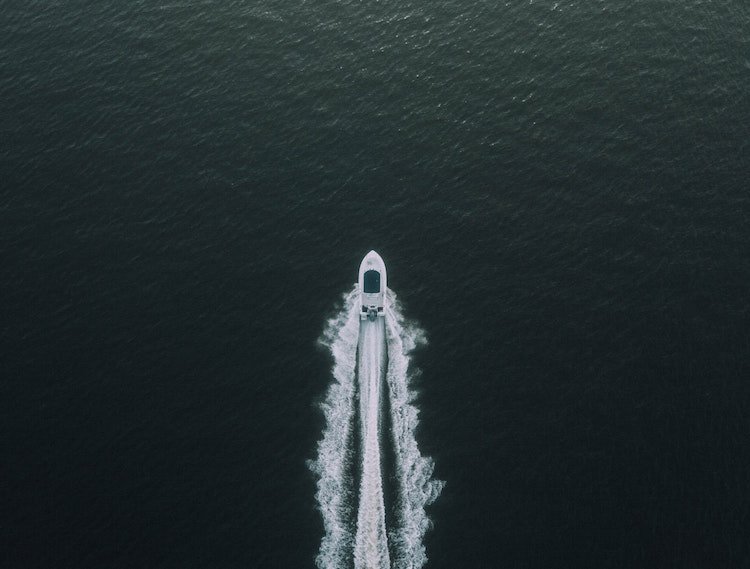 HOW MUCH DOES A YACHT COST? WHAT REALLY HAS AN IMPACT?

Let’s start from the beginning.

Designing a yacht is no joke!

It’s an operation that requires a large amount of time (from six months to over a year), as well as necessary expertise in mechanical and marine engineering, so that once it has been launched it will be perfectly seaworthy, besides being able to show off at the docks.

It’s no coincidence that most of the initial planning research goes through studies on hydrodynamics and stability. These are indeed the fundamental steps to define “the outer shell” of your yacht.

Another considerable item of expenditure is the engine – if you decided to purchase a recreational sailboat, you would spend less for the same size. That’s because the engine, besides affecting the final price of your yacht, also has an impact on the very structure during the construction phase.

But what really makes a difference in terms of price is the interiors!

HOW MUCH DOES A YACHT COST? THE COST FOR SETTING UP THE INTERIORS 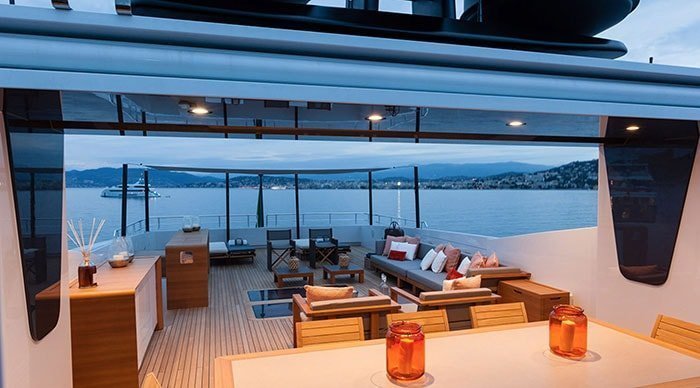 The sum to allocate for setting up the interiors of your gorgeous yacht is generally the one that weighs down on the final cost. To be honest, it’s also the one that best represents the owner’s style and personal taste.

If it’s true that a yacht is the status symbol par excellence, nothing is left to chance when it comes to setting up the interiors.

Inside these large yachts there are obviously very few problems due to lack of space (which happens in smaller boats), but this doesn’t change the fact that the interiors should be planned with great attention to detail, without wasting space nor leaving out any type of comfort. 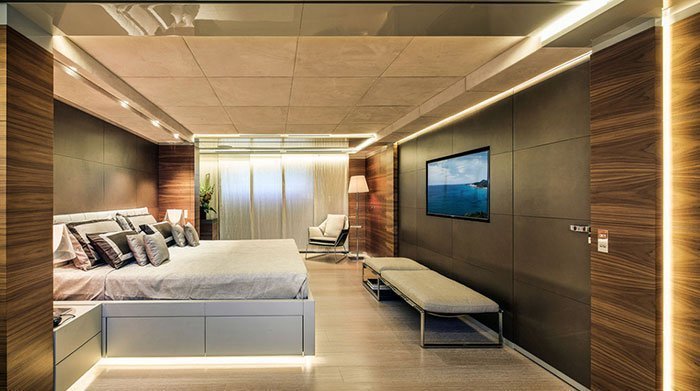 The master cabin inside a yacht

Choosing the right type of interior furnishings for one’s yacht is a very fascinating topic that may be interpreted in a thousand different ways. 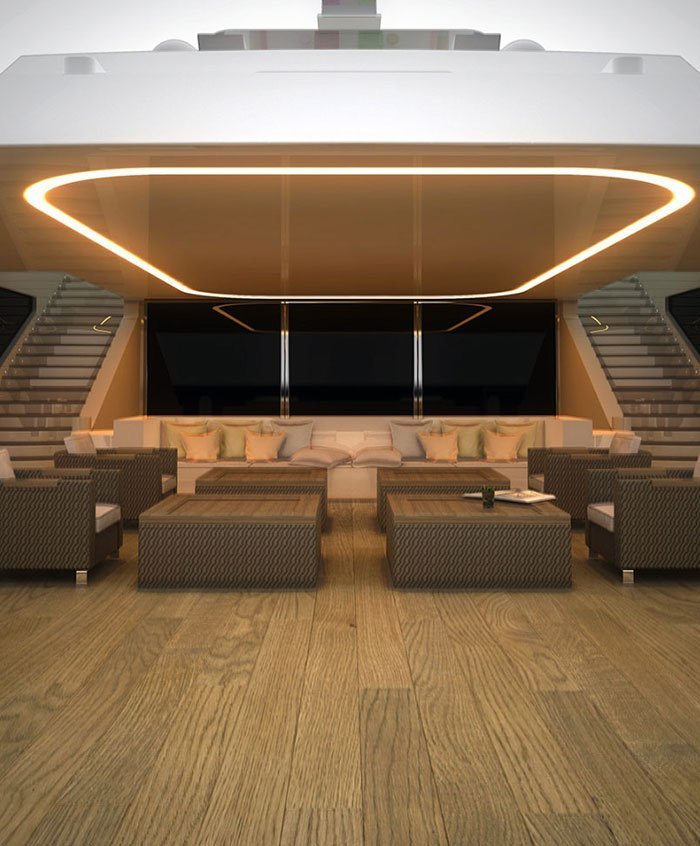 An outdoor lounge on the deck

LUXURY YACHT: HOW MUCH IT COSTS TO PURCHASE AND MAINTAIN ONE

After seeing these gems, are you wondering how much a luxury yacht costs?

Depending on the size you choose for your yacht, you will already have a starting point of expenditure to take into account, to which you will need to add all of the expenses for the finishes and the interior furnishings, which are tailored to one’s needs and personal taste.

For instance, for a 15 to 18 metre yacht the price varies between 700 thousand euros and one million euros. Of course, the larger the boat, the higher the price.

For yachts that fall into the 20 to 30 metre category, you should consider a cost that varies between 2 and 5 million euros. If you decide to go big and exceed a 30 metre length for your superyacht, get ready for a cost that amounts to 50 million euros onwards.

To the purchase price of your superyacht you will need to add the necessary expenses in order to best maintain it. Let’s see which ones.

THE MOST EXPENSIVE YACHTS IN THE WORLD

Which are the most expensive luxury yachts?

Although it doesn’t cause a stir for its size (it’s 30 metres long), this yacht owes the first place to its exclusive furnishings by one of the greatest exponents of luxury boat design, Stuart Hughes.

For its construction, which lasted three years, the British designer chose to use gold in several components, starting from the base of the boat up to the details, such as the indoor stairs, the dining room and the anchor. All of these surfaces were treated with gold, for a total amount of approximately 100,000 kilograms of solid gold used.

If that’s not enough to declare History Supreme the most expensive and exclusive yacht in the world, the other crown jewel of the boat is hidden in the master bedroom, in which one of the walls is cladded with meteor stone.

Do you think that Hughes has neglected some details? Absolutely not!

Even the bottle of the owner’s favourite beverage was designed specifically for this boat and is embellished with an 18-carat diamond.

The price of this gem of the seas is around 3 billion euros.

The yacht Eclipse ranks second – it’s 536 feet (about 170 metres) long and boasts a price that is around 1.5 billion dollars. Made by the German Blohm & Voss shipyards, Eclipse is not only the world’s second most expensive yacht, but also the world’s second largest one. 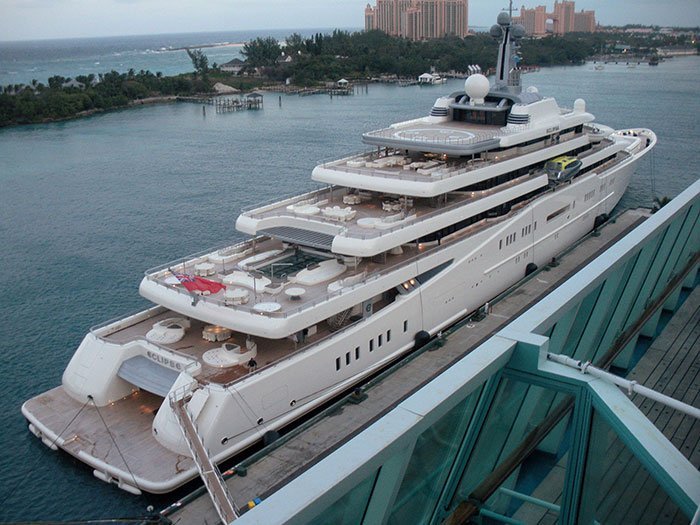 Eclipse moored in the harbour

It has no less than 24 guest cabins, two pools, a collection of hot tubs and two helipads.

But what makes this yacht different from the others is the attention that the designers have put in the security systems – indeed, as instructed by the owner, Eclipse was equipped with intrusion detection systems, windows with bulletproof glass and a special laser shield that emits blinding light to prevent meddlers from taking pictures of the inside.

In order to best manage this megayacht during navigation periods, a crew of seventy is needed. 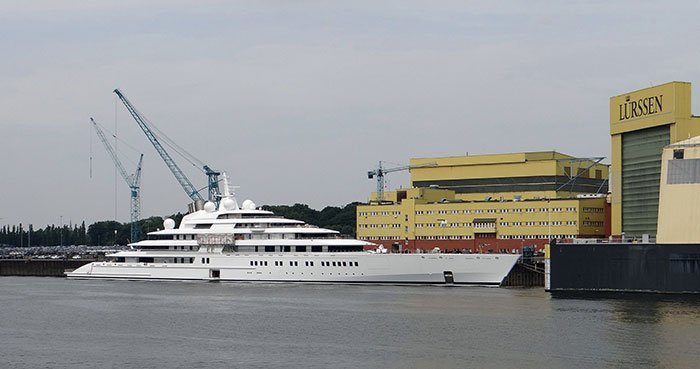 The yacht Azzam in the Lürssen shipyards basin

Considered by its very manufacturers, the Lürssen Yacht shipyard, the most complex and demanding yacht ever built, Azzam boasts the title of world’s largest yacht – with its 180 metres, it’s even longer than the magnificent Eclipse.

Despite the noteworthy size, this yacht can reach a cruising speed of about 30 knots. The interiors of this luxurious yacht were planned by designer Christophe Leoni, who created a sophisticated atmosphere that recalls the imperial style of the early twentieth century.

The price of this floating mansion? Approximately 600 million euros.

Discover the latest trends in yacht lighting. Download our catalogues!

– How to calculate downlight spacing